Kom Ombo is actually a double temple, two pathways throught the courtyards behind the pylons in front, leading to side-by-side sanctuary rooms. One side was dedicated to Sobek, the crocodile god. The other side was dedicated to Horus-the-elder. The temple is right on the riverfront, and the cruise ships dock beside the temple. 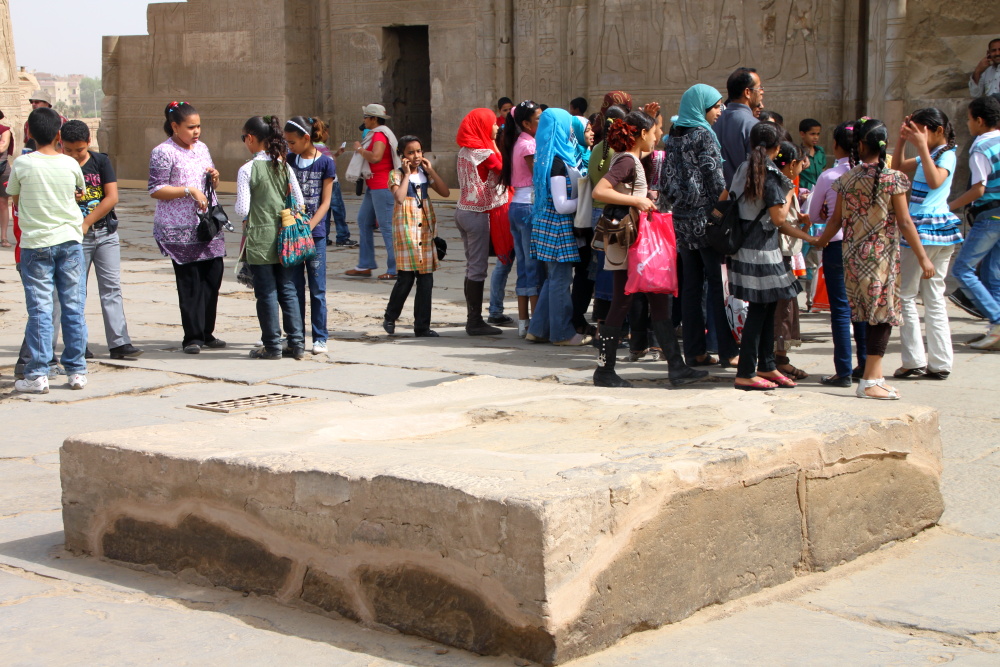 A bunch of schoolchildren lined up to see the temple. Some people may be poor, but these children were clean, polite, well-dressed and even have cell phones. 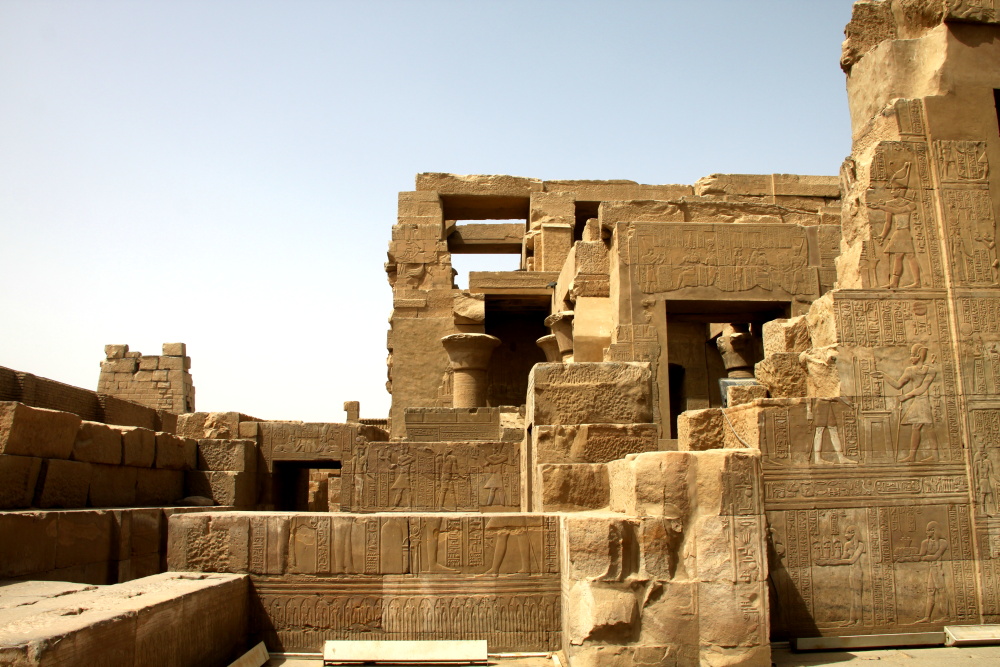 A view of the temple complex from the side.

The massive columns in the inner courtyard.

The series of entrace doorways into the inner sactuary from the outer courtyards. That’s our guide Mohammed in the picture…

The back of the temple complex – the black altar stone in the sanctuary area can be seen at the left.

Above the columns is the Sun and Vulture decoration common to a lot of temple ceilings. 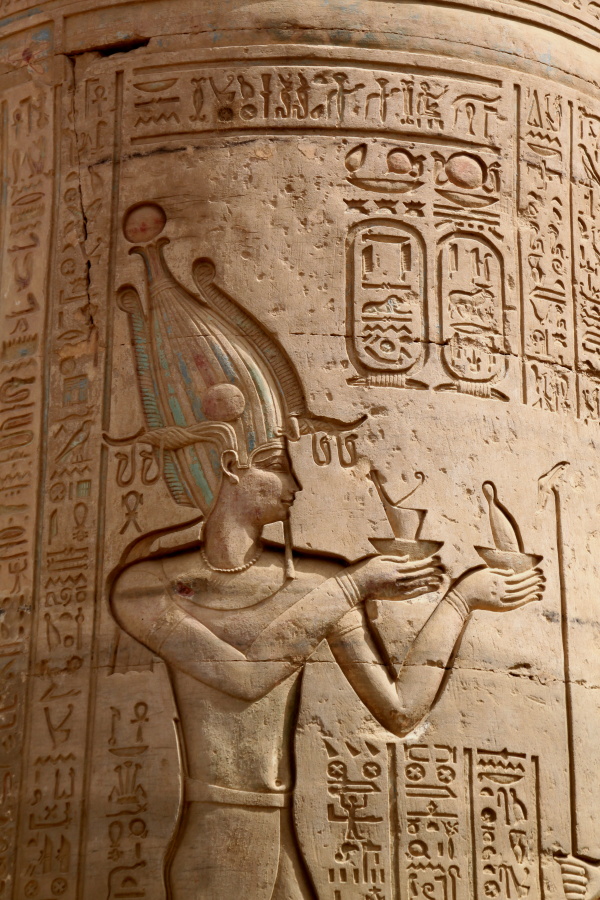 An example of one of the column carvings. The detail is
amazing and the colours are still vibrant almost 2500 years later (thanks to cover from the drifting sand.) 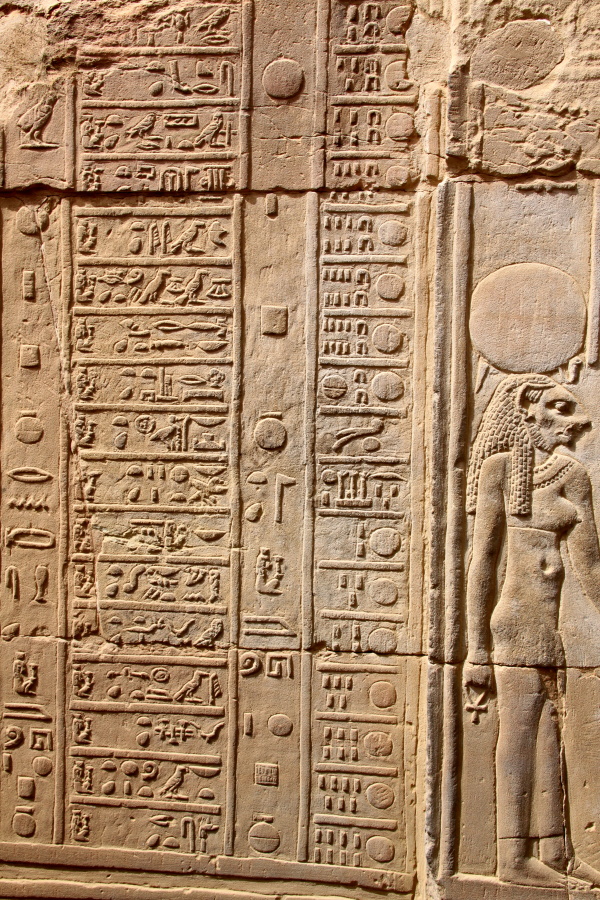 A segment of the “calendar wall”; you can see the progressively numbered days using marks for 1, 5, and 10. It was used to list feast days as the year progressed.

Some of the detail on the carvings is very fine and precise. (The weather was actually quite hot there) 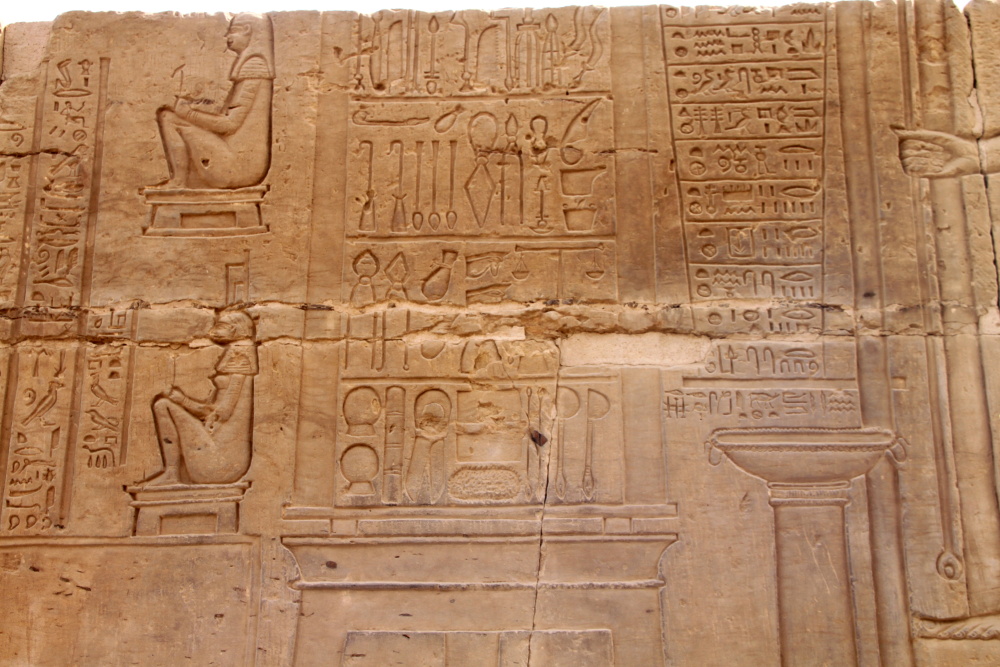 The famous carving depicting what are assumed to be medical tools. The Egyptians practiced some fairly advanced medicine.

This carving, not far from the medical tools, depicts birth. The wall is like a medical textbook. 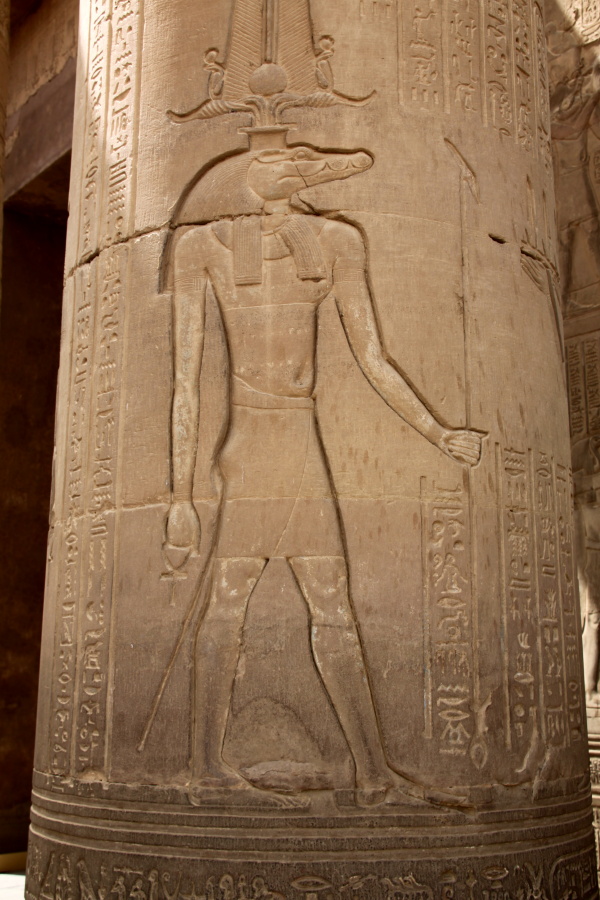 An example of the carvings on the columns, the crocodile god Sobek. 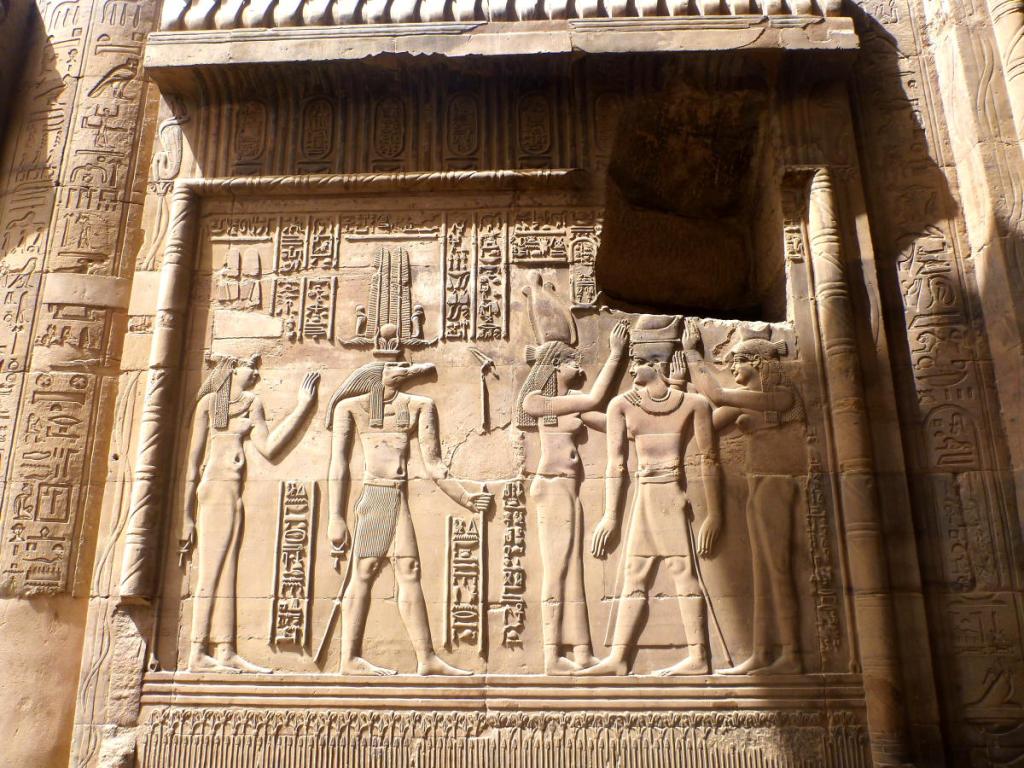 Our road trip – one day from Aswan to Luxor – included stops at two major temple complexes.

In a ruined segment of the front of the temple, you can still see the wooden butterfly keys used as part of construction to hold the blocks together.

Mummified crocodiles in the adjacent small museum; one of the temples was dedicated to Sobek – plus, this seems to be a convenient excuse to get rid of any pesky crocodiles.

THE TEMPLE AT EDFU

The temple at Edfu was over the Nile on the west bank, through the city of Edfu. It is the legendary site of the final battle of the god Horus against the god Seth. The temple is dedicated to the god Horus.

Along on wall of the compound is a “cartoon” sequence of carvings illustrating the sequential stages of the battle, as Horus bests Seth and he becomes a progressively smaller indeterminate hippopotamus or pig creature.

When Alexander and then his general Ptolemy conquered Egypt, the Ptolemy dynasty appropriated the title of Pharoah. To justify their claim, this temple like many others has a “Birth House”, a small chapel decordated with the history of how Alexander (nad hence Ptolemy) are descendants of the gods just like the Egyptian pharoahs.

Of course, like many old temples, when the Christians used these for churches or other uses, they not only blackened the ceiling with soot from torches. They also took the time to chip away at the “graven images” of the old gods, particluarly faces and hands. Based on the results, occasionally they got tired of the work half-way through.

The locals visit the temple too. 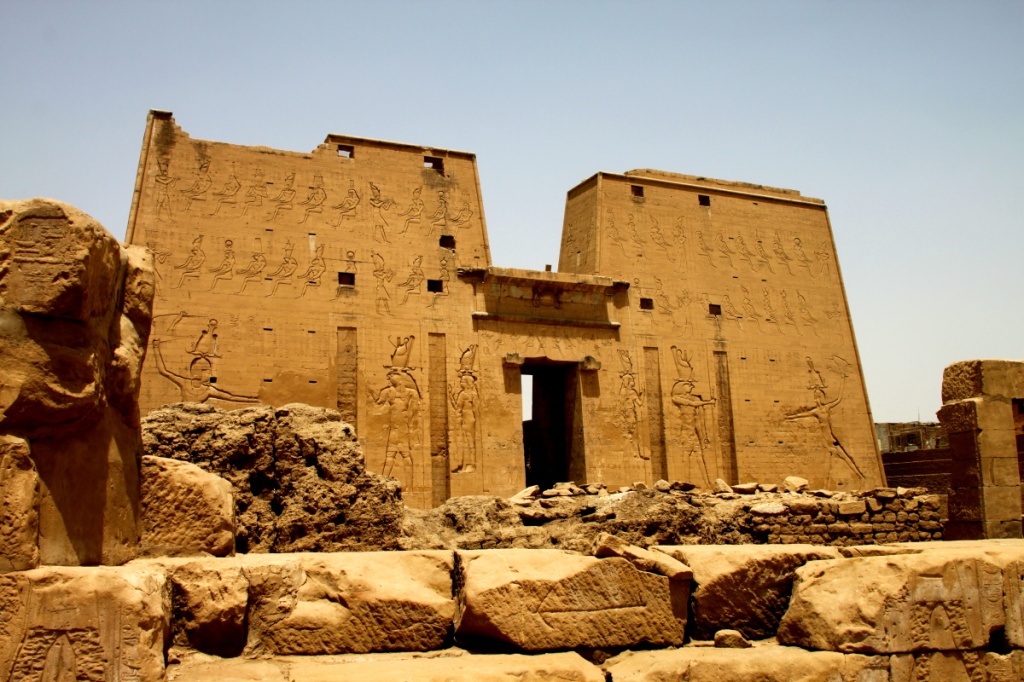 The front pylons of the temple, nearly intact.

Scene from the Birth House; in the center, the rightful pharoah is nursed by a godess. As often is the case, the figures, especially faces and hands, are chipped away in early Christian times.

The pylons from the inside of the courtyard.

The entrance from the outer courtyand into the hypostyle hall.

The columns in outer courtyard.

The ceiling of the hypostyle hall still black with soot from when the temple was used as a church. Restoration and cleaning is still going on.

A replica of the “god’s barque” that carried the image of the god inside the sanctuary. A barque was discovered here, but is now in the museum in Paris.

A panel of the sequence from the surrounding wall, showing the fight between Horus and Seth; unfortunately, Seth is lost or chipped away here. Horus hunts him from a boat, and Seth was depicted as a hippopotamus or similar beasts. Note that like many sites, the images of the gods, especially faces, have been chipped at by early Christians.

Drainage gargoyles along the outside wall of the temple.

Making an offering to a god. 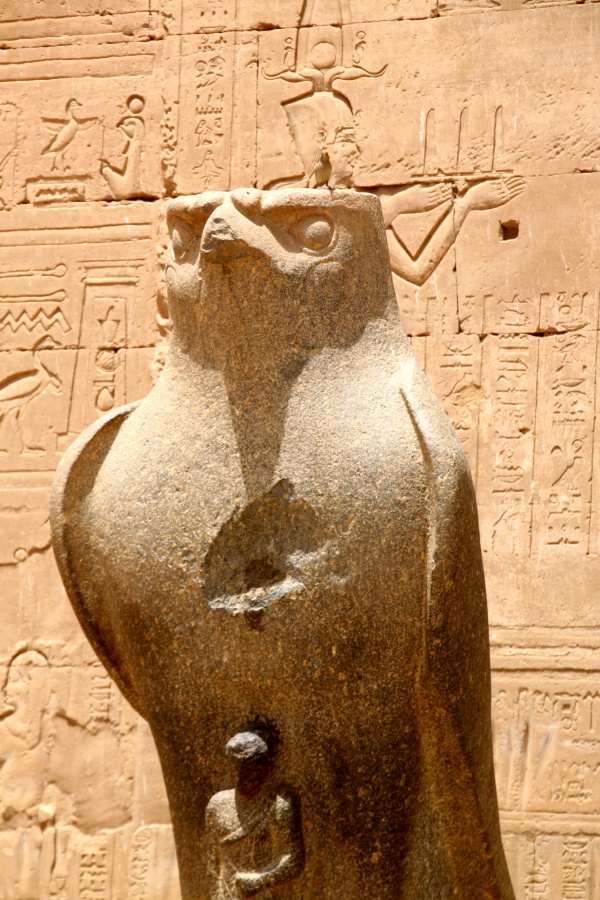 Statue of the falcon god Horus in the courtyard. It likely at one time had the double crown of Upper and Lower Egypt.

A Sphinx Statue by the entrance to the temple complex.

The buildings overlooking the temple complex. Someone has a fantastic view out of their window looking at the front of the temple.